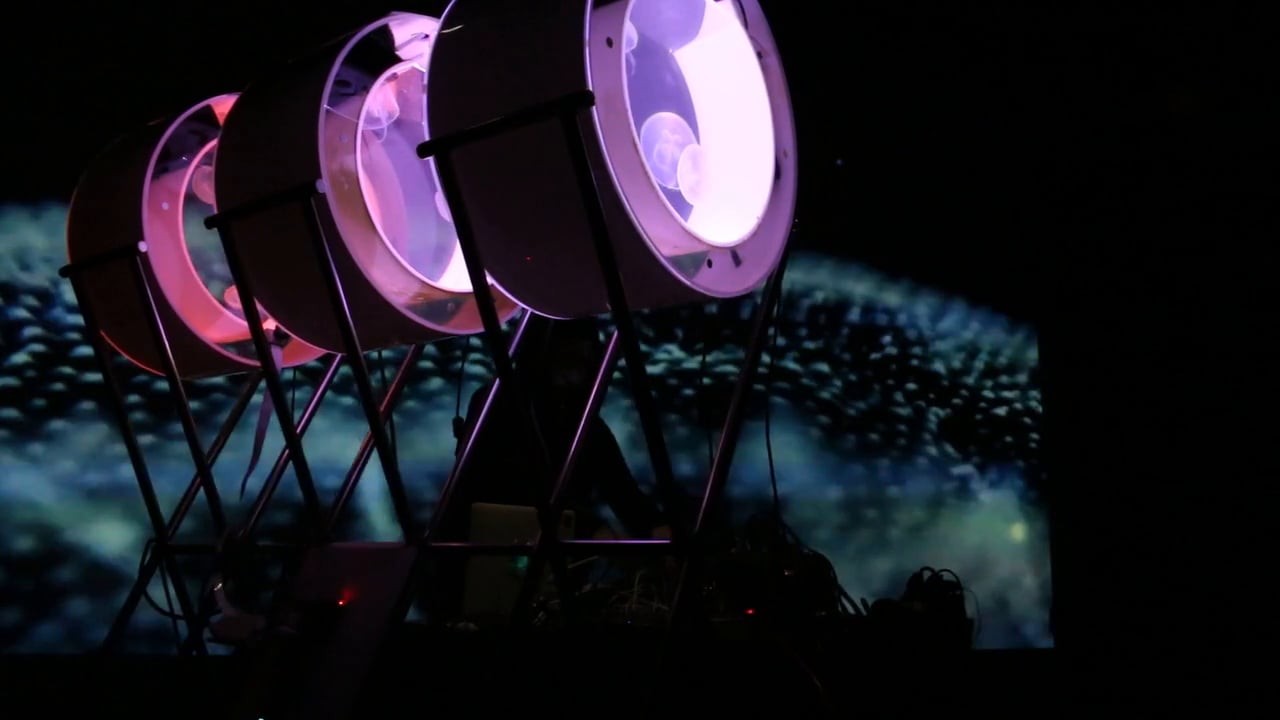 Aurelia 1+Hz / proto viva generator addresses the possibilities of coexistence of animals and machines. In contrast to robots, which are driven by digital artificial intelligence, the project uses a live organism to process the “aliveness” of a simple machine.

In the era of the Sixth Extinction of species, after pulsating through the world’s seas and oceans for over 500 million years without ever being endangered, the jellyfish are the perfect evolutional archive, showing us potential moves the future might make. The eternity of the jellyfish – some are even immortal as a species – has been fueling even the most ancient human thoughts on eternal life, on the mythical search for the fountain of youth and on immortality.

Improved living conditions in a technologically advanced world enable us to lead a significantly longer life than in the past. But how long is long enough? The answer to this question appears to be in the hands of the cosmetic and pharmaceutical industries, which use the powers of biopolitics and capital to divide our society into those who are able to prolong their life, and into those who are merely trying to survive. The historical tactics of civilizations trying to ensure their cultural immortality are today contrasted by the biotechnological possibilities of actually designing and controlling life, demanding a new, critical redefinition of social values.

In the installation Aurelia 1+Hz / proto viva generator, jellyfish are presented as the “energy” organisms- as they are running all the installation: the mechatronic part, video and sound.

Their movement and constant contraction are being captured with hd raspberry pi camera. The data captured by the camera is transformed in real time by the composed code inside of the raspberry into information that serves for the navigation of all the servomotors at the mehatron.

Robertina Šebjanič (SI) is a Ljubljana-based intermedia artist. Her art practice evolves around the fields of humanist and natural sciences. For several years her research focus has been oriented towards the field of bio-art, living systems, AV performances, noise/sound art, installations and interactive ambiental responsive immersive environments.The context for her ideas and concepts is often realized in collaboration with other authors, which is why her works embody interdisciplinarity and informal integration. She is a member of the HackteriaLab network and Theremidi Orchestra. She studied at the Famul Stuart School of Applied Arts and sculpture at the Academy of Fine Arts and Design in Ljubljana (SI), as well as at the Valand School of Fine Arts in Gothenburg (SE).

Robertina is internationally exhibited artist. She did performed /presented / exhibited at solo and group exhibitions as well as in galleries, biennials, triennials and festivals to name few:

He began in computer ‘demoscene’, where he was mostly active in making music. This continued with organization of demo parties, mostly drum and bass parties. At that time he coproduced a lot of CDs (organization/press/promotion) under the publishing house Monkibo, among which also the first slovenian breakbeat compilation ‘Monkorama’ which contained his creations as well.

He continued with programming and exploring the media and for that purpose he created a programming platform ‘napava’ and collaborated with Neven Korda in different projects such as video source/effect manipulator. Besides that, he occasionally Vjjed at parties. After one-way video/effect he proceeded with interactive projects, starting with Play VJ that enabled manipulation of video with the movement of hands through the space above which there was a camera. Afterward followed the seminar task at the faculty – virtual skiing which was hosted in Hevreka and presented at the IEEE conference. It contained 3d ski run, made by the OpenGL technology through which you were able to ski with moving of the body from left, right or lower for the speed (camera followed the movements). The next idea was the ping pong game, transmitted to another medium: v-pong. This game was projected on the floor and the players could play by interfering with projection, their movements were interpreted by a camera above them. It turned out to be very popular at night urban situations. With Robertina Šebjanič he collaborate since 2014 on the project Aurelia 1+Hz/ proto viva generator – installation and Aurelia 1+Hz / proto viva sonification – and immersive audio visual performance presented premiere in Paris at Le Cube under the production of DécaLab in february 2015.