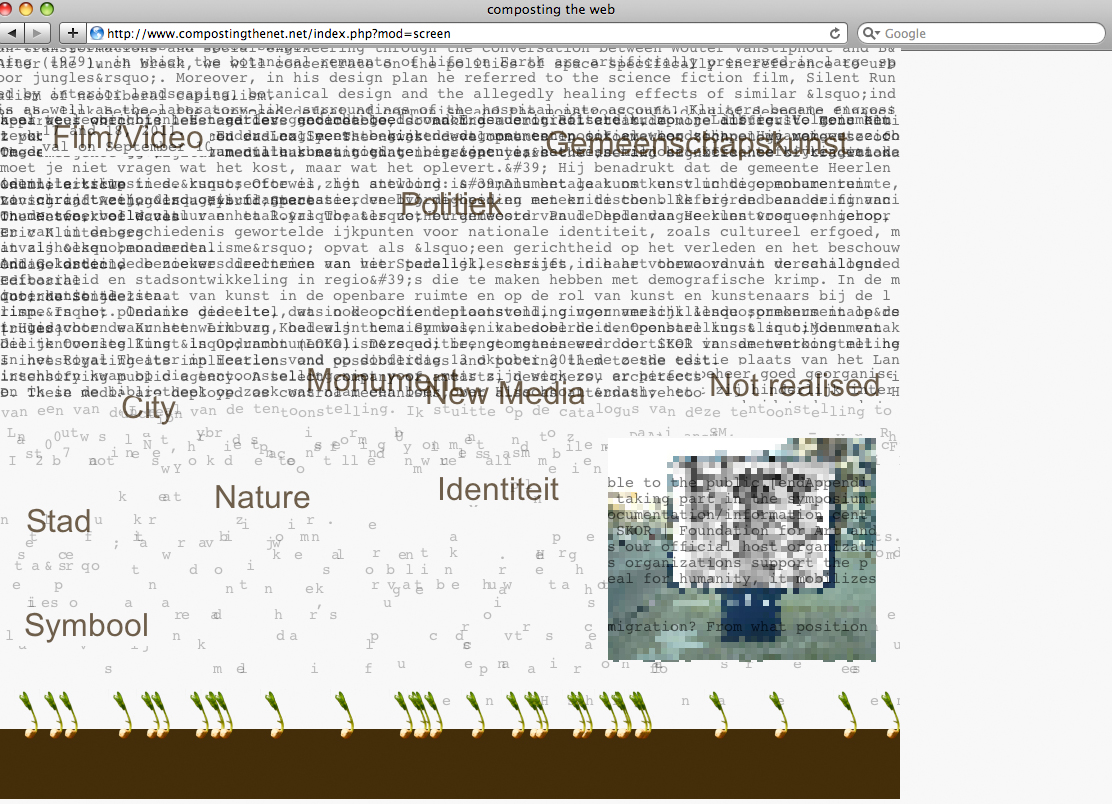 a collection of DATA HACK

Reading (2014) converts Cheang’s net art piece, Composting The Net (2012), into a scrambled reading experience. Composting The Net is a generative work where texts are randomly retrieved from online mailing lists and open archives, including IDC (list of the Institute for Distributed Creativity), Spectre (list for media art and culture in Europe), nettime (lists for networked cultures, politics, and tactics), empyre (soft_skinned_space), and are fragmented and toppled onto a digital landfill. A dense layer of unfiltered text falls from the top of the screen, as though pressed onto paper by an old fashioned word processor. The sentences dissolve into an unsettled cloud of letters that hit the earth like rain. The data debris makes up compost-enriched soil where fresh sprouts emerge to testify to our digital (non) existence.

Typing (2014), taken from Cheang’s piece, Baby Work (2012), converts a web interface that appears as a patchwork of alternating circuit boards into a hypermedia work. Baby Work is a performative installation in which keyboards are stripped to the membrane, keys are detached and reinstalled by the viewing public. Typing is a recent capture of Baby Work‘s web simulation created exclusively for Sedition. In Typing multi-channel sound is randomly retrieved and composed as the 3D rendered keys appear and disappear one after another, until a shower of keys fills the screen entirely. All the while indecipherable sequences of electronic sound bytes and discordant jingles, chime in to create an increasingly dissonant soundtrack, which closes dramatically with a sharp note denoting the end of everything.

Seeding (2015) derives from Seeds Underground (2013), which is both a web interface and a public performance project where seed exchange parties are held. The work, turns the text from original court document from the Supreme Court of the United States, Vernon Hugh Bowman v. Monsanto case, a legal case involving the infringement of a seed patent by the former of the latter (held in Washington, D.C. on 19 February 2013). In the piece, the individual letters from the document dissolve, and finally reappear as ever-replicating seeds. The seeds are symbolically transmitted by a divine wind and then distributed by human/machine power across the vast virtual farmland. Seeding is a powerful gesture towards the detriments of patents on organic farming and the desire for the liberation of seeds.
Shu Lea Cheang, Reading | Typing | Seeding,
digital limited edition © Shu Lea Cheang,
courtesy of www.seditionart.com