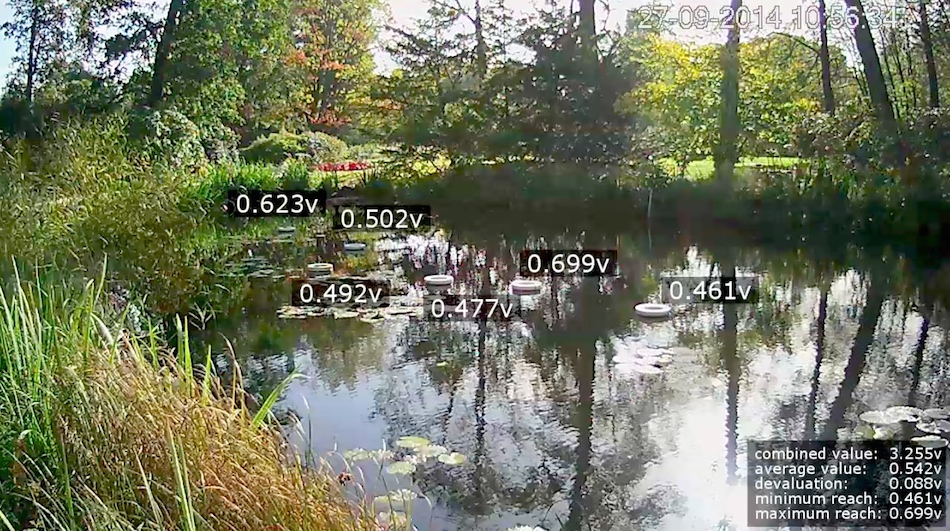 Biotricity is an art-science research that uses negotiations with living microorganisms for free electricity. Bacteria, who live in a mud,water sediment, waste, soil, inside of our bodies, that is, everywhere where they can ‘eat’ organic matter and where there is nearlyno oxygen, release free electrons. For several years RIXC artists, together with scientists, have experimented with MFC (microbialfuel cells), the next generation biotechnology – monitoring bacterial activity in dark gallery spaces, organizing public DIY workshops on how to build ‘bacteria batteries’, and installing bio-energy ‘power-stations’ outdoors in ponds.To monitor the bacterial electricity generation process in out-door conditions, RIXC artists use contemporary language and tools ofscience and innovative technologies. Last summer six “bacteria cells” were installed in the pond of Botanical Garden of University ofLatvia in Riga. Live web-cam images and continues measurements of bacteria electricity fluctuations, were delivered live on theInternet, thus making audible and visible the invisible activity of nature – such as what is happening at the bottom of a pond, and which otherwise we can neither see nor hear. Bacteria fuel generation process was interpreted into live sound and image structures, providing an aesthetic perspective on the interaction between nature and technology, ecological systems and electronic networks, human and micro-worlds. Collected data from the seven month-long observation of the Pond Battery – from summer to winter, are now transformed into data visualization, video and sound, creating sensual and emotional experiences – a poetics of green energy.

Rasa Smite and Raitis Smits are artists, curators and cultural innovators, working with science and emerging media technologiessince the mid 90s. Raitis Smits has received PhD from Latvian Academy of Arts (2015), and Rasa Smite holds her doctoral degree insociology of media and communication; she is author of the book “Creative Networks. In the Rear-View Mirror of Eastern EuropeanHistory”, published by Amsterdam’s Institute of Network Culture (2012). Rasa and Raitis are key founders of RIXC – Riga basedCenter for New Media Culture, and artist collective. RIXC organizes annual art and science festivals in Riga, curates RIXC Galleryprogramme in Riga as well as international large scale exhibitions, and publishes Acoustic Space – peer-reviewed journal series.Through their artworks, events and publications, Rasa Smite and Raitis Smits with RIXC has invented and explored novelty themessuch as internet radio (Xchange network project, receiving PRIX Ars Electronica award, 1998), acoustic space lab (collaboration withradiostronomers in Irbene Radiotelescope, 2001-2005), locative media (the first workshop in Karosta, inventing this term, 2003),waves – electromagnetic was as material and medium in arts (large-scale exhibition, 2006). Since 2009 they are engaged in building“techno-ecological” perspective, creating artworks such as Talk to me (human-plant communication, since 2011), and Biotricity(experiments with MFC, since 2012), developing Renewable Network (in Baltic-Nordic region), and launching new art and scienceconference and exhibition series – Renewable Futures, the first edition of which takes place in Riga, October 8-10, 2015.