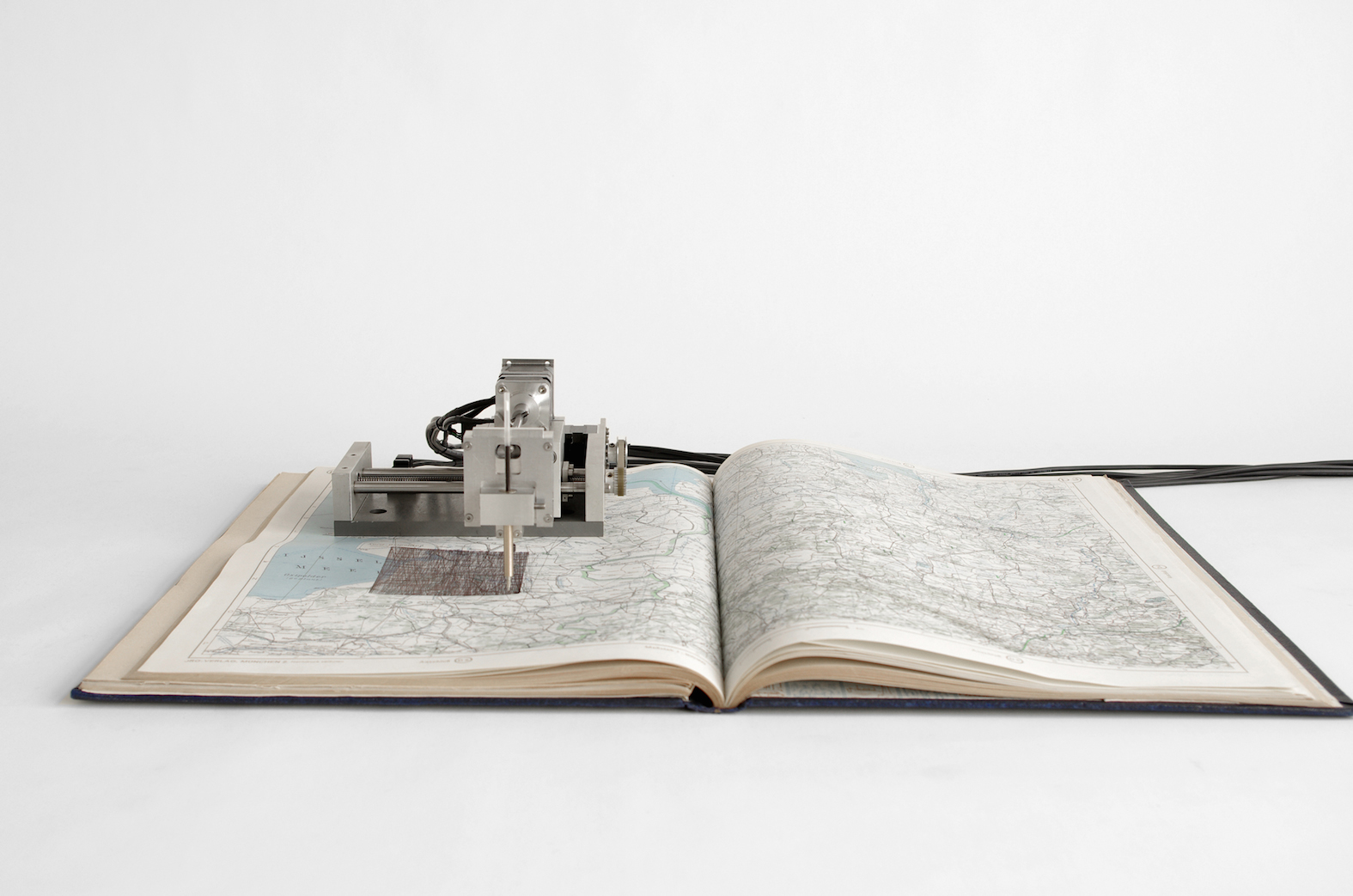 Satellites are used for almost all modern achievements, from  communication or navigation systems to environmental monitoring and  military purposes. By now there are approximately 3000 satellites in  orbit, about 1000 of those are still operating. The majority of these  objects revolve our planet in 200km to 2000km height, with an orbital  period of 90 to 130 minutes.

Despite their overall application, we hardly notice their existence.   From earth they are visible only in the rare case, that they are in  the perfect angle to reflect the sun. All necessary data about the  positions and paths of satellites is known though, as it is crucial  for determining free spots for new satellites. Accessing this  information allows the drawing machine SATELLITEN to keep record of  the sheer amount of satellite flyovers in regard to its own location.  In a square of approximately 10cm², the machine traces their lines in  real time until the far away object leaves our horizon again.

SATELLITEN uses its own position as starting point and old maps of the  area as a base for its drawings. For a long time, maps and atlases  used to be one of the only sources for geographical knowledge. Now the  paths of the satellites start to form on top of the familiar  neighbourhoods, thus setting the normally invisible traffic in  relation to our usual habitat. But as time passes the lines of the  satellites will obliterate the well-known streets and cities,  overwriting not only the information the map originally contained but  as well the marks left by the preceding satellites. In the long run  only a black square will be left, it is the remains of this rather  parasitic machine: a temporal window, showing the seemingly arbitrary  but highly structured activities in lower earth orbit.

We are an atelier for arts, light and robotics based in Berlin, consisting of Jan Bernstein, Juliane Götz and Sebastian Neitsch.

With our works we try to challenge the usual perception of machinery and the ubiquitous expectation of their presumed functionality. Our approach mostly starts from a technological interest or possibility but often leads the expedient notion of its meant usage ad absur- dum. The focus is on the actual operation performed, the movements and procedures conducted, showing the inherent structures and processes of the machines as autonomous, self-reliant systems. In many of our works the image of machines as tools, as servants to humankind is replaced by the concept of the machine as a well equipped and sovereign actor.

Jan Bernstein concentrates on the creative implementation of physical and functional aspects into Quadrature’s work. His substantial practical expertise fertilizes his artistic research in materials and fine mechanics. Influenced by his specialty, Jan’s creative approach is concentrated and structured, keeping every detail in mind in order to formulate the ideal aesthetic and conceptual expression.

Sebastian Neitsch rather employs experimental and associative methods in order to achieve innovative and intuitive systems and thoughts for Quadrature’s conceptual and artistic vision.While his focus is on the digital world – including everything concerning code, electronics and new technologies – he considers teamwork and communication as the perfect source for generating creative output and solutions.

Juliane Götz is the latest member. Her emphasis is on the theoretical and contextual questions and their translation in the projects. As Juliane combines the hardware based pragmatism and digital utopias in Quadratures work, she applies various techniques and methods from both realms. One of her favourite areas is the intersection and interaction of code and object.

They all share a love for machines and outer space.