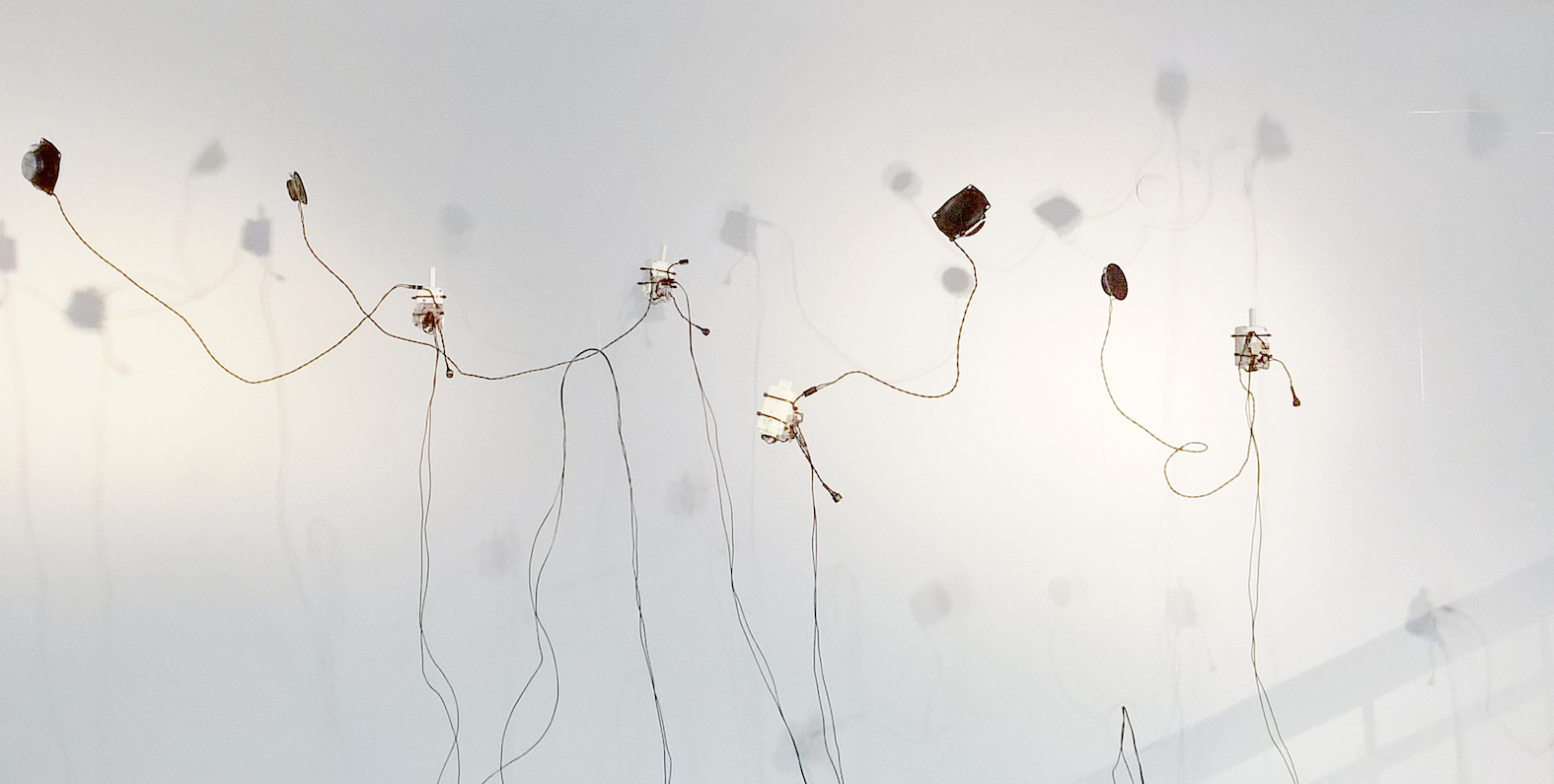 Whispers consists of a dozen small modules suspended on thin transparent threads in a space. Each module – originally taken from children’s speaking toys – has a speaker, a microphone, a motor and a small computing unit (circuit). Together they build up an autonomous system listening to bird sounds transmitted by one static speaker in the room. The modules work as performers, receiving and playing back all nearby sounds they can pick up, creating a situation of live sampling. Thereby every module works on its own, autonomous and independently but mimicking the other ones. Movement is created by the built in motors which take the sound input as the triggering moment.

Like birds in the forest the modules try to impress each other getting louder, screaming more, or becoming quiet. It is hard to locate a single sound or a single module, they work all together creating a network of information. The system itself is an open system and can be modified by the soundinput of the visitors. The self-reflecting systems transforms into a participatory space.

Katrin Caspar is an artist who works with electromechanical material creating mainly kinetic sculptures and sound installations, often inspired by everyday objects. She is interested in systems and network structures, their organization and (potential) rules and on a more complex level on their behaviors, how they act and perform and their possibilities for storytelling. Katrin graduated from the University of Arts Bremen with Bachelor of Digital Media in 2007 and received a Master in Fine Arts from at the Valand School of Fine Arts in Göteborg in 2010. Her works has been shown amongst others at OHP Festival, Media Lab Prado, Pixelache Festival, Ostrale Dresden, LEAP Berlin, Transmediale and WRO Media Art Biennale.

Puhakka creates art works which are moments, atmospheric experiences and narratives at the same time. Her works appear like surreal images in which fiction and reality meet, meanings shift, past and present fuse. By putting the viewer in the middle of the installation, she creates the work through direct experience and experience transmitted through images, sound, objects and even smells. By applying a poetic language she absorbs the storytelling art in art practice. The personal history and past tradition are as important. Time, memory and histories always play the key roles in her works. Puhakka has presented her works in Finland, Sweden, Norway, Germany, Russia, Senegal, United States, Iceland, Poland and Bulgaria.